Some of Our Favorite MSP-Themed Memes “Memes” have entered the common language in a very real way, as everyone - from politicians to people on Facebook to yes, businesses - use them to communicate their messages… but why? Today, we’ll go over why the Internet meme has become so common, as well as share some of our favorite IT memes.

What Is a Meme, Anyway?

The origins of the word meme actually come from academics, as the biologist Richard Dawkins coined the term in his book, The Selfish Gene, published in 1976. In it, he proposed that societies naturally create units of cultural transmission - precisely what we see today, millions of times over, in the Internet meme. Memes as we know them today share our thoughts, feelings, and beliefs across the Internet - some more powerfully than others.

In order to be seen as a success, a meme has to do well based on three separate measurements: longevity, fertility, and copy-fidelity.

In other words, how long the meme lasts (are we talking Grumpy Cat or Harlem Shake?), how many different situations the meme can be applied to (how many things make Grumpy Cat grumpy?), and a set pattern must be applied to (Grumpy Cat can never not be grumpy - but he can be used sarcastically to make a point).

Social media in particular has helped memes become part of the public discourse, as their quick and simple messaging has given us a means of communicating that is both direct and engaging.

It isn’t hard to figure out why memes are likeable - they’re designed to be relatable. We’ve all felt how Grumpy Cat looks, which is why we can find his frustration so funny. We’ve felt that way before. As such, here are a few of the IT memes that resonate with us: 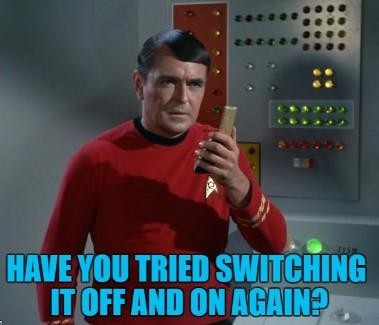 We’ll start off with one that most people are familiar with to at least some degree. The advice to try rebooting (turning it off and on again) has become a punchline to IT services - despite being an effective way to solve many problems technologies cause. Hence, that is why it is so funny to see Lt. Commander Montgomery “Scotty” Scott of the U.S.S. Enterprise, a vehicle stuffed with technology far more advanced than the PCs we use today (tactile switches and lights notwithstanding) giving someone the same suggestion over his communicator. Some things never change. 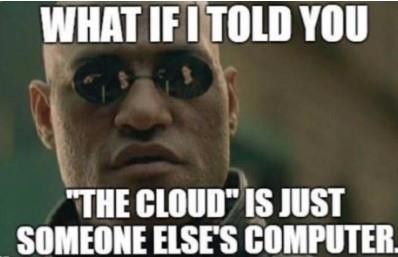 Some memes are more direct than others, which helps if you are trying to get a particular point across. Just take this one, featuring Morpheus from The Matrix, explaining the nature of the cloud. By taking a well-known line from the movie and subbing in the lesson - in this case, the fact that the “cloud” is just another computer that you can access over the Internet and make use of - a lesson about the nature of modern computing is revealed. 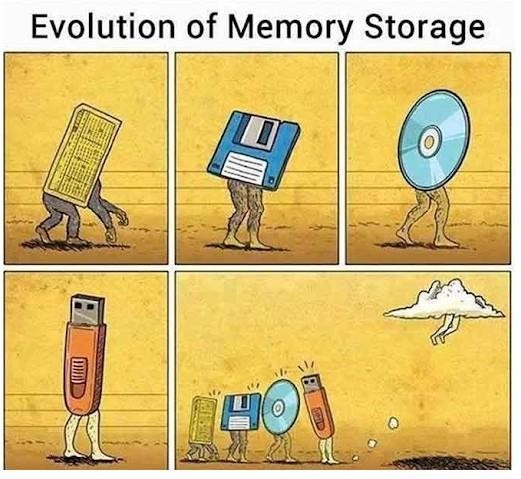 Memes don’t always have to be drawn from film and television. A cartoon, like the one pictured above, can also serve as a meme - and could even be split into five of them. For instance, if we wanted to show the progression of data storage technology, we could produce something like this... 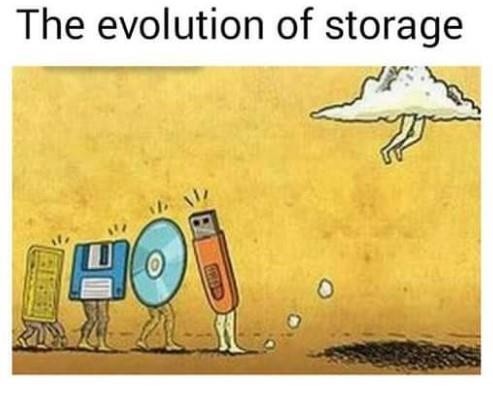 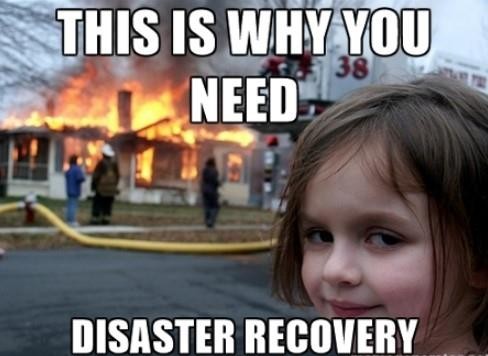 Uh-oh. This particular meme format (known as “Disaster Girl”) is certainly an effective way to instill a sense of foreboding in someone. So it only makes sense that it is the one used to communicate how important disaster recovery is to protect your business against accidents; or presumably, if that young lady is around, “accidents.” 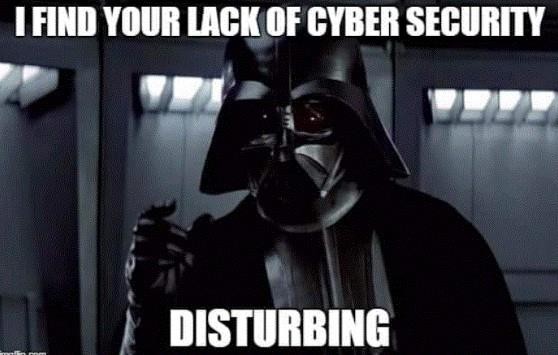 There is no understating how important cybersecurity is to any organization. Even Darth Vader worries about it, as it surpasses Admiral Motti’s lack of faith to be thing that disturbs him. By combining such an iconic line from a character who serves as the face of one of the most well-known film franchises - period - it clearly communicates the importance of comprehensive cybersecurity. 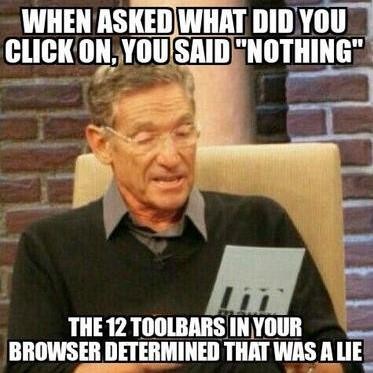 While we don’t wish to disparage anyone, it isn’t uncommon for people in IT support to grow frustrated that people don’t understand the impact that their actions can have on their devices. This innocent lack of understanding can make it seem as though problems appeared out of nowhere, and that the machine is just bad and dumb. However, a great many IT issues can be traced back to the actions of the user, as our borrowed Maury Povich makes clear. During his ongoing talk show, Povich famously uses lie detectors to determine if his guests are being honest about their usually salacious fights. Instead, Povich here helps a user understand that everything you do on a computer makes a difference, and it is easy to disrupt its function without thinking. 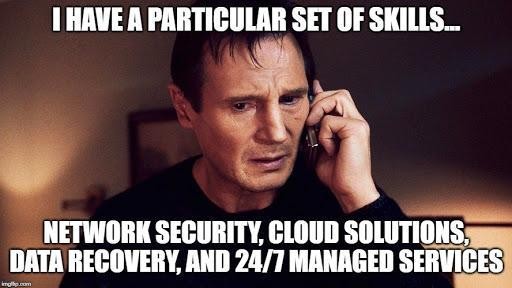 Finally, we end with a few memes discussing managed IT as a whole. First, we focus on Liam Neeson’s character from the Taken series, Brian Mills, who has what he refers to as a “particular set of skills” thanks to his time in the CIA. For our purposes, rather than being used to look for, find, and kill someone on the other end of the phone, it makes more sense, and it’s sillier for Mills to have the skills typical of an MSP - clearly demonstrating the comprehensive value that managed services can bring. 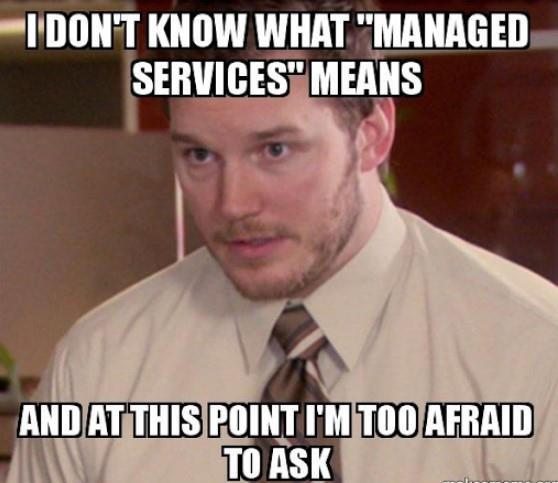 Finally, we come to our last meme for this blog. We’d be the first to admit that the term ‘managed services’ is fairly vague, and that not many people know the full extent (or any extent, really) of what we do. This is what makes it so comical to use Chris Pratt’s breakout character from NBC’s Parks and Recreation, the simple and kind Andy Dwyer, to express this. The somewhat naive character is often confused by what other people are referring to (the original quote expressed his ignorance of who Al Gore was) and so translates to our purposes quite nicely.

Memes are a great way to explain a variety of things, and managed IT is no exception. Do you have any favorite memes that would work for managed IT, or an idea for one? Share them in the comments - all we ask is that you keep it PG.

When you subscribe to the blog, we will send you an e-mail when there are new updates on the site so you wouldn't miss them.

Tip of the Week: Organization is Key
Stay Ahead of Time